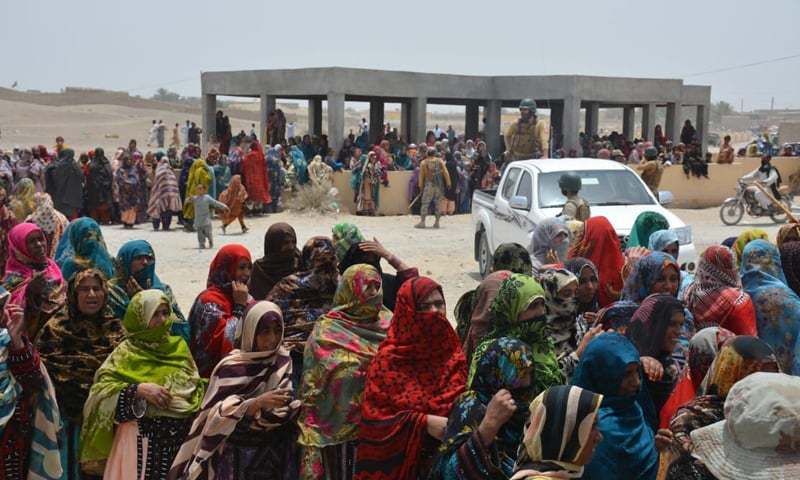 PESHAWAR/SAHIWAL: In a historic first, women in some conservative parts of Khyber Pakhtunkhwa and Punjab came out of their homes to cast their votes in the general election on Wednesday as candidates sought to fulfil the legal requirement of minimum 10 per cent women’s turnout to validate their result.

In Balochistan, too, women came out in large numbers to vote despite terror attacks and repeated threats.

Women in tribal areas and other conservative areas had been barred from voting in the past general elections, as the practice of keeping women from voting is a norm under verbal and written agreements bet­ween candidates and family elders in such areas.

However, for the first time in the country’s electoral history, the Election Commission of Pakistan (ECP) annulled the result of Dir Lower (PK-95) by-polls in 2015 after finding that none of the registered women voters had cast votes.

The Elections Act requires the ECP to declare an election null and void if women’s turnout in a constituency is less than 10pc of its total polled votes.

On Wednesday, candidates and local administration on ECP directives ensured at least 10pc turnout of women voters in the districts notorious for barring women from voting. The measures encouraged women voters not only in Khyber Pakhtunkhwa’s Dir Lower but also in a village of Punjab’s Sahiwal district to visit their respective polling stations and cast their vote.

“Since the 1990s we had not seen women coming out in large numbers,” said Zahid, a local journalist in Dir.

“I voted for the first time. My mother, aunt and cousins also went out today to vote,” said a cheerful Shafi Naz from Dir Lower while speaking to Dawn. She wanted to go to vote during the previous elections also, but the family elders did not like women to leave their homes. Surprisingly, she said, nobody objected to their going out to vote. However, she was not aware of the fact that Election Act required 10pc women vote to acknowledge result of a constituency.

In North Waziristan, Bajaur and other far-flung parts of Mohmand tribal agency also saw a rise in female voters’ turnout despite lack of facilities and slow polling process.

Women of Jahan Khan Village (111/9-L) in the National Assembly constituency of Sahiwal (NA-147) also created history by voting for the first time in any general election for which the administration, civil society organisations and media could be credited.

The village is divided among Jahan Khan, Shadookay and Kubaykay localities out of which Jahan Khan is the most populated. The Joiya biradri dominates the village.

Deputy commissioner Mohammad Zaman Wattoo told Dawn that a special session had been arranged to train women to vote by the polling staff. He said if the media had not highlighted lack of women’s participation in elections, this year too they would not have voted in the village.

District Election Commissioner Rana Ghaffar said the election commission had categorically told village elders and candidates that in case there was less than 10pc turnout of women, the ECP would declare election results null and void.

Undeterred by the terror attacks targeting election activities, women voters in Balochistan, too, came out of their homes to cast votes.

“Our brave sisters from Panjgur have come out in great numbers to vote, despite threats repeated terrorist threats,” National Party chief Hasil Bizanjo stated in a tweet to appreciate their courage.