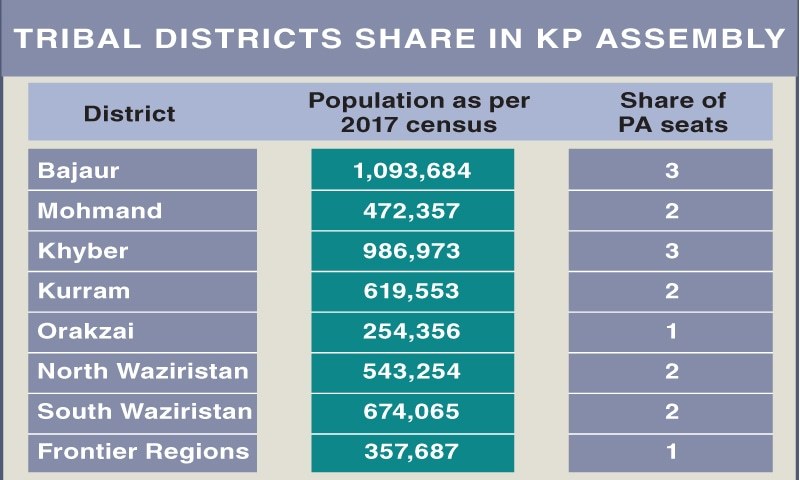 ISLAMABAD: In a move that will finally lead to the first-ever provincial assembly elections in the territories formerly known as the Federally Administered Tribal Areas (Fata) in the next few months, the Election Commission of Pakistan (ECP) on Wednesday determined and notified the share of tribal districts in the provincial assembly’s seats.

The decision was in line with Article 106 of the constitution amended through the 25th Amendment in May last year and last-minute promulgation of an ordinance to avert disenfranchisement of contiguous tribal regions. The ordinance amends Section 20 of the Elections Act, 2017, inserting a new sub-section (2A) which reads: “For the purpose of delimiting constituencies, for the general seats of the provincial assembly of Khyber Pakhtunkhwa for tribal areas, two or more separate areas may be grouped into one constituency for their elections to be held in 2019 and by-elections related therein and thereafter this sub-section shall stand omitted.”

According to the share determined by the ECP, Bajaur and Khyber will have three general seats each, Mohmand, Kurram, North Waziristan and South Waziristan will have two seats each and one seat will go to the Frontier Regions.

Under the amendment, the elections for these seats were to be held within one year after the 2018 general elections.

A senior ECP official when contacted said the elections for 16 general seats of the KP Assembly will take place in May or June this year and a notification to this effect will be issued in March.

The current calendar year appears to be challenging one for the ECP as it has ordered revision of the electoral rolls and plans to update the voters’ list by June 30. That means the commission will have to give priority to tribal districts to make sure that the coming provincial assembly polls there were not affected.

Meanwhile, as the deadline for around 15 million voters enrolled in areas other than their addresses on computerised national identity cards (CNICs) to get registered as voters on one of the two addresses mentioned on their CNICs expired on December 31, the ECP has ordered revision of electoral rolls under which those who failed to act would be registered as voters at their permanent addresses.

Sub-section 4 of Section 27 of the Elections Act reads: “Notwithstanding, anything contained in this section or any other provision of this Chapter, the registration of a voter at an address other than the permanent or temporary address mentioned in his National Identity Card shall remain valid till he applies for transfer of his vote or for modification or renewal of his National Identity Card in which case his vote shall be registered according to the temporary or permanent address mentioned in the National Identity Card.” While a proviso with the sub-section reads: “Provided that this sub-section (4) including this proviso shall stand omitted on 31st December, 2018.”

The ECP official said the votes of those who did not avail the facility of transferring votes to addresses mentioned on CNICs have rendered ineffective.

He said in exercise of its powers under Article 219-A of the Constitution and Section 36 of the Elections Act the commission has ordered revision of electoral rolls so that the fundamental right of vote of the people could be protected.

The voters can get information about the registration of their votes by sending SMS on 8300.