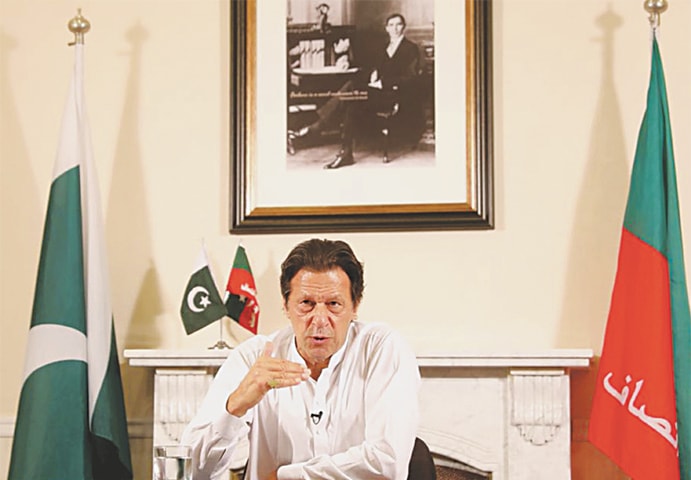 ISLAMABAD: Imran Khan on Thursday claimed victory in the general elections, even as the parties that took on his Pakistan Tehreek-i-Insaf at the hustings pointed to the painfully slow counting of votes and said the polls had been rigged.

In a 25-minute speech delivered some 22 hours after polling ended on Wednesday evening, Mr Khan said he was ready to facilitate any investigation into the charges of rigging.

“First of all the election commission was not set up by the PTI, but by the PPP and PML-N jointly. And the caretaker governments were set up after due consultations,” he said.

This week’s elections were the country’s most transparent and clean polls, he said. “But if you want to open up a constituency [for counting of votes, etc] we will facilitate you.”

“No outsider will come to help us solve the problems; so we will have to fix the problem ourselves.”

The government led by his party would reduce expenditure and increase income, he said. “We will reform the tax culture and I pledge to ensure that the money collected through taxes is spent only on the people.”

The cricketer-turned-politician said his aim was to lift the poor out of poverty, he said. About 45 per cent of the country’s children suffered from stunted growth because of malnutrition and 25 million children were out of school, he said.

He pledged to turn Pakistan into a welfare state by following in the footsteps of Prophet Mohammad (peace be upon him) who set up the first welfare state in Madina.

He said that after coming to power he would improve governance by strengthening institutions and ensuring accountability for all. “Our accountability will start from myself, followed by that of my ministers, and so on.”

Clad in a white shalwar-kameez, Mr Khan vowed that his party would not resort to political victimisation of his opponents.

He said that no politician had had to fend off more personal attacks than him. “But all that is in the past because my cause is greater than my personality.”

He said that after a struggle of 22 years, he was now in a position to turn into reality the dream that he had for Pakistan. “God has given me the opportunity to come to power and implement what I had set out to, back in 1996,”said the PTI chairman.

He said he had entered politics because after making considerable progress the country had begun to decline. “I wanted to correct that; otherwise God had already bestowed on me all that I could wish for.”

The financial and other problems being faced by the country were such that peace with neighbouring countries had become a necessity, he said. “We want to improve our relations with China further because we can learn so much from them,” he said.

The areas in which Pakistan could learn from China were poverty alleviation and eradicating corruption.

Mr Khan said he wanted to see Pakistan forge balanced and mutually beneficial relations with the US. “In the past, our ties with the US have been one-sided, with Washington giving us aid and we fighting their battle.”

Turning to ties with India, he said the two neighbours should have better relations if their people were to make progress. “But the core issue should be addressed.

“That’s why I feel that the two countries should negotiate and find a solution to the Kashmir issue.”

He told the Indian leadership that if they took one step forward, Pakistan would take two steps, as it sincerely wanted to resolve all the disputes and improve ties.

He was critical of the Indian media and said the way his image was portrayed in the last few days it looked as if he was some kind of a villain from Bollywood movies.