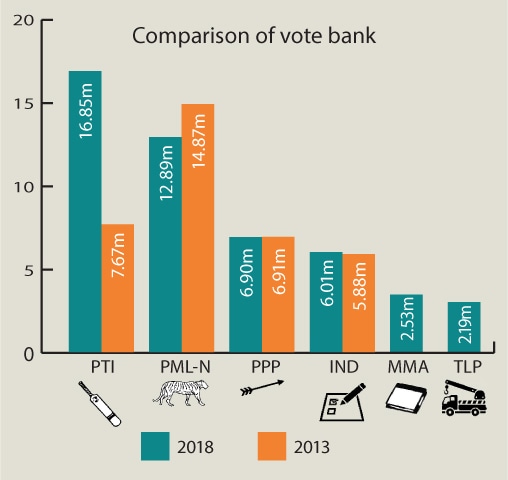 ISLAMABAD: The Pakis­tan Tehreek-i-Insaf (PTI), led by PM-in-waiting Imran Khan, has secured around four million more votes than its arch-rival Pakistan Muslim League-Nawaz (PML-N) in the elections to the National Assembly, as the PTI’s vote bank has registered an over twofold increase when compared to the results of 2013 elections.

As the PTI makes efforts to form a government in the Centre for the first time, the statistics released by the Election Commission of Pakistan (ECP) show that its votes increased from 7.67 million in 2013 to 16.85 million in 2018.

While the PTI rose from the second to the top position in the chart of party-wise vote bank, the case with PML-N was reverse — as it lost around two million votes in this election. The PML-N had secured 14.87 million votes in 2013 polls when the total number of registered voters was 86.18 million. Five years later the total number of registered voters reached 105 million, yet the PML-N’s share in the vote bank shrank to 12.89 million.

However, the Pakistan Peoples Party continues to retain the third position, with no major change in its vote bank. The total number of votes it bagged in 2013 polls was 6.91 million that decreased to 6.90 million in 2018.

The independents had secured 5.88 million votes in the previous general election and this time they got more than six million votes.

The Muttahida Majlis-i-Amal (MMA), an alliance of politico-religious parties, secured 2.54 million votes from across the country.

The Tehreek-i-Labbaik Pakistan (TLP) — a new entrant in electoral politics — emerged as the fifth biggest political party in the country by securing more votes than any party other than the PTI, PML-N, PPP and MMA. The TLP bagged 2.19 million votes, holding a lead of nearly one million votes over the Grand Demo­cratic Alliance (GDA) that bagged 1.25 million votes.

In 2013, the MMA did not exist and the parties comprising the conglomerate had contested the election then individually. The same was the case for the TLP.

Each of the three other parties — Awami National Party (ANP), the Muttahida Qaumi Movement (MQM-P) and PML-Q — secured between half million and one million votes.

The MQM, which had secured 2.35 million votes in the previous elections, managed to get 0.729 million votes. The ANP got 0.808 million votes, while the Chaudhry Shujaat Hussain-led PML-Q, which had formed the government in the Centre in 2002 election, could manage to get a little over half a million votes this time.

The Balochistan Awami Party (BAP) received around 317,000 votes followed by Balochistan National Party (BNP) which got around 215,000 votes.

Retired General Pervez Musharraf-led All Pakistan Muslim League (APML) managed to get 36,489 votes from across the country.